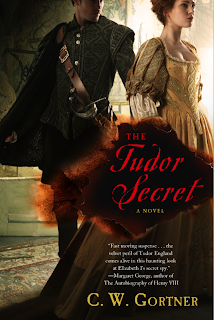 The era of the Tudors was one of danger, intrigue, conspiracy, and, above all, spies.
Summer 1553: a time of danger and deceit.  Brenden Prescott, an orphan, is reared in the household of the powerful Dudley family.  Brought to court, Prescott finds himself sent on an illicit mission to the king's brilliant but enigmatic sister, Princess Elizabeth.  But Brenden is soon compelled to work as a double agent by Elizabeth's protector, William Cecil,who promises in exchange to help him unravel the secret of his own mysterious past.
A dark plot swirls around Elizabeth's quest to unravel the truth about the ominous disappearance of her seriously ill brother, King Edward VI.  With only a bold stable boy and an audacious lady-in-waiting at his side, Brendan plunges into a ruthless gambit of half-truths, lies, and murder.  Filled with the intrigue and pageantry of Tudor England, The Tudor Secret is the first book in the Elizabeth I Spymaster Chronicles.

My Take:
I must admit, I count myself among the legions of fans obsessed with the Tudor Era.  The scandal, the romance, the intrigue, the beheadings, the phantom pregnancies, blah blah blah I eat it all up!  I really enjoyed the fact that The Tudor Secret took place during one of my favorite time periods, but from the perspective of someone different.  I've read a million books on the same 5 or so people's point of view, you know I love you  Queen Elizabeth I, but hey, I wanna hear what someone else has to say!  Enter Brenden Prescott, supposed humbling foundling thrust into the world of ultra deadly intrigue that surrounded this particular court.  He had a fresh, idealistic perspective that was very naive at first, but very noble and likable.  Normally, I don't love the books that focus so much on the political "so and so works for so and so who is the sworn enemy of so and so who casts their lot in with displaced royal so and so" but I tell ya, The Tudor Secret was all about the political and it was exciting.  There were more than a few unexpected twists and turns that had me flying through this book in record time.   Now, this book is absolutely more fictionalized than a lot of other books of this genre, heck, the main character, his entire storyline and his romantic interest are all fictional, but I didn't mind.  I really felt like the point of the book was to get across how treacherous and downright frightening this court really was, how literally one wrong word spoken at the wrong time could cause you to lose your head.  Reading the book from the perspective of one who has no power and no leverage, and must watch every word he says almost makes you feel paranoid and claustrophobic, in a very intense and exciting way.   Now I have to say, there was a time or two when something would happen and I'd think, okay, that went a little too smoothly, I think something really bad is about to happen--but it didn't.  While at times it did seem too easy, it didn't take way from the overall excitement of the book.  I really enjoyed this Tudor thriller and I can't wait to read the rest of the series.  The Tudor Secret only covered a very short period of time, there is so much more to read about!  With all of this in mind, I rate The Tudor Secret a 2, Borders with a Coupon
Do you agree with my review?  Do you think I'm totally off base?  Either way I'd love to hear from you, be sure to leave a comment and tell me how you feel!

If The Tudor Secret was a movie, it would likely be rated a very light PG-13 for some violence and one instance of relatively sedate sexual content
***FTC Disclosure:  This book was provided by the author in exchange for an honest review, no other compensation was given, all opinions are my own***
If you are interested in purchasing The Tudor Secret, please consider supporting The Book Buff by purchasing from the following Amazon link, thank you!

Oh I loooove the cover to this! Very captivating.

Hi
Thanks - i love reading about the Tudors - they really were such an interesting period of history! This sounds up my street. I'm currently reading A Phillippa Gregory novel - the White Queen. I've really got to get my head around when in history this was - well it was in the 1400's anyway. It's quite good. But I preferred The Other Boleyn Girl.
If you want a review of the White Queen - I'll be writing it soon as im done and you can read it here:
http://copywritersbookshelf.blogspot.com/

You know, I reviewed The WHite Queen, I really enjoyed it, but I agree it was not as good as The Other Boleyn Girl. Also, as far as getting your head around when The White Queen took place, just think of it like this, Elizabeth Woodeville from The White Queen was Henry the 8th grandma, thats how I thought of it. I usually relate things to the Tudors because I am more familiar with them :)

Thank you for this marvelous review, Kate! I appreciate your time and truly hope your readers will enjoy THE TUDOR SECRET.

I basically agree. The fact that the book was more fictionalized than one would expect considering its title was a pleasant surprise for me.

Maria Papadopolou http://livingwithpoetry.blogspot.com/
Author of the Poetry Book: From Hell With Love.

I love historical fiction, particularly set in the Tudor period - thanks for this review, it will be added to by TBR pile!

Thanks for the review! Love this time period also....I'm definitely going to check this one out.